MIRI: A crew member was reported missing and two others were injured when a fire broke out on an oil and gas drilling vessel, Ocean Geos, off Kuala Baram waters near here this morning.

The injured were identified as Muhammad Hafiz Ismail, 36, and Khairul Isma Ismail, 35.

Hafiz sustained 20 per cent burns on his body while Isma suffered injuries to his his face. Both have been rushed to Miri Hospital for treatment.

The missing crew member, a Malaysian, has yet to be identified. An explosion had occurred in the ship’s engine room which led to the fire. (Pix courtesy of reader)

He said the fire outside the ship has been put out and firefighters were now trying to put out the blaze inside the ship.

“”Our effort to enter the vessel was hampered by poisonous gas. However, search and rescue effort is ongoing,”

Md Fauzi said out of the 39 crew members, six of them were foreigners (five Indonesian nationals and a Thai national).

It was learned that in the 3am incident, an explosion had occurred in the ship’s engine room which led to the fire.

Meanwhile, Petronas in a statement said the ship was conducting geotechnical work in the area during the incident.

“The Petronas Emergency Response Team (ERT) has also been activated to monitor the incident, including working closely with the relevant authorities to investigate the case.

“”Petronas has always placed the safety aspect of its employees and operating areas at the highest priority level,” he said. 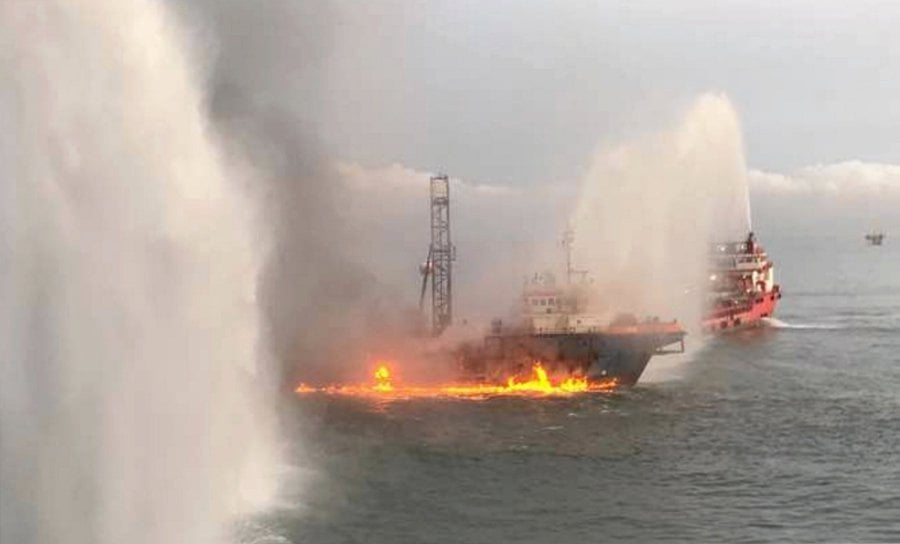 An oil and gas exploration vessel, Ocean Geos, caught fire off the Baram waterway near here this morning. (Pix courtesy of reader)